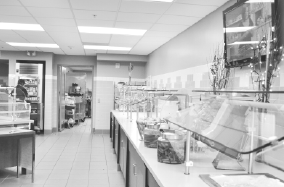 The improved Geisert cafeteria has been in service for over a month now, and so far it seems things are going well.

In fact, the numbers have been so high traffic has become a problem in the cafeteria.

“I don’t like the lines,” said senior sports communication major Zach Butler. “Everything else is better but the lines have gotten worse.”

Smith said the lines are worsened by the way students can only enter into the food line rather than the dining room as they had before.

“I think they get congested right out there,” she said. “If they would have brought [students] in the other way I think it would have been better.”

Still, freshman hospitality leadership major Madison Kamp said she knows to avoid the cafeteria at peak hours when the lines are at their longest, and she enjoys the variety of food that came with the renovation.

“I like all the vegetarian options,” she said. “I only eat chicken so having different choices is nice. The vegetarian lasagna is really good.”

Smith said she thinks the variety of the daily menus are the best part about the updated cafeteria.

“Balance U is really a neat program,” she said. “It’s set up by a dietician and it uses recipes that we have to follow exactly.”

Assistant manager Bri White said she agreed the vegan options has much more variety as well.

“Before we just had noodles and whatever vegetables,” she said. “Now there are dishes. Everyone seems to enjoy it.”

Senior finance major Dan Wood said while there were more options, he wasn’t impressed by the food.

“I don’t think the food is any better,” he said. “There are more healthy options but none that I would eat.”

Smith acknowledged that while students could offer the healthy choices, a new kitchen and more possibilities for meals could only do so much.

“It’s a lot healthier than it was last year but the kids still want all the fried junk food,” she said. “We try and provide some kind of fried option for them every night.”

The new cafeteria is drawing diners from all over campus, and not just students. Many people without meal plan come in and pay with cash for a meal at the revamped dining hall.

“We get a lot of people from the staff,” Smith said. “They used to go to the Student Center. Now they’re coming here to eat lunch.”

White said the biggest problem outside of the traffic issue was trying to keep students from filling up to-go boxes after eating in the cafeteria without paying for two meals.

“You’re supposed to take it away from them or make them pay again,” she said. “It’s hard though because they’ll argue with you that they pay this much a year they should have unlimited food.”

The general consensus from students and Geisert staff remains positive about the changes.

Wood had one suggestion for  the cafeteria.

“Bring back the tubs of ice cream,” he said. “Or failing that, a soft serve machine.”

“If possible, make that happen by the end of the week.”