Little Rock Nine member reflects on racism, past and future 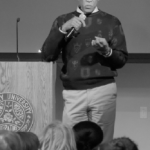 With humor and wisdom, psychology professor and “Little Rock Nine” member Terrence Roberts spoke on the past, present day and future to a packed Student Center Ballroom on Nov. 20. His story was one of struggle and overcoming prejudice in a place that had little incentive to change.

Roberts was 15 years old when he volunteered to attend Little Rock’s predominately white high school. Despite the national law that made segregation illegal, the town still treated the two high schools within its limits as racially separated entities.

“I discovered right away that [Little Rock] was not friendly, in fact, more than that it was dangerous,” Roberts said. “Because the word was, ‘We don’t really like you.’ … My immediate thought was that everyone in Little Rock, Ark., was crazy and had escaped from the local asylum.”

On the first school day of 1957, Roberts and eight other students tried to enter Central High School, only to be stopped not only by large white mobs but also local police and the state’s National Guard members.

On the second day of school, the Little Rock Nine gained access with the aid of 100 air-raid soldiers and stayed in the building for an hour and a half before being escorted out “for their own safety.”

But Roberts said he realized the implications of racism long before he entered that school on that day. He questioned everyone around him, and he said he was told “don’t rock the boat” and “don’t cause trouble.”

“The trouble was there when I arrived; how could I be accused of causing the trouble?” Roberts said.

Roberts spent a year at Central being bullied, insulted and harassed. As the school year of 1958 began, the governor of Arkansas closed the schools to try to maintain segregation.

“[The governor] forgot that that would keep white kids out [of school] too,” Roberts said. “But when you think about it, there is no requirement for government office for I.Q.”

In the question and answer session following Roberts’ formal speech, he discussed topics like the parents of the Little Rock Nine members and the current state of racism.

“Our parents knew without a doubt the danger we were facing,” he said. “They knew; we didn’t. But they were strong in their support, [and] they never wavered.”

On the subject of how racism is still present today, Roberts said the world has still “refused to address the core issues.”

But of the future, Roberts quoted Jewish tradition in saying that people have the responsibility to repair the world around them, but they must also know it is unachievable.

Holding this knowledge as truth, Roberts said every person must still try to fix the way we think, because one can never know what the universe has in store.

“Who knows,” said Roberts. “By some twist of cosmic fate it just might work.”