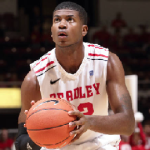 The last time the men’s basketball team started a season 5-0, the Braves made it all the way to the sweet 16 of the NCAA tournament in the 2006-2007 season.

After the Braves took care of business Friday night against Chicago State in a 77-64 victory, the Braves looked to match that historic start to a season as they entered into the State Farm Center in Champaign to face Illinois. Unfortunately, the sheer size and strength of the Fighting Illini was too much for the Braves as they fell 81-55.

Coach Geno Ford praised the former MVC stars, but also knows that his team can play at a higher level and can be a better team.

“We have to get tougher as a team,” Ford said. “The game was won in the lane, and we also didn’t shoot the ball well.”

For the Braves, the only bright spot on the evening was senior forward Tyshon Pickett. Pickett scored a game-high 21 points and six rebounds. Pickett controlled the pace for the Braves and received high praise from his coach.

“I thought Tyshon was our only positive tonight even though I don’t like to single any one player out,” Ford said. “I thought the rest of our team was bad, and Tyshon asserted himself early and did a great job at that.”

Pickett knows that the Braves could have played better on defense and other places throughout the game, but the Braves will come back from this defeat.

“We didn’t play Bradley defense tonight and that hurt us,” Pickett said. “We need to stick together to play Bradley basketball and, trust me, this loss will not affect us, and we will push forward.”

The Braves finish off their short two game road trip as the Braves head to Tempe, Ariz., to face the Sun Devils of Arizona State. Game time is 8 p.m. and can be seen on the Pac-12 Network, or listen locally on 1470 WMBD.

For all the latest rumors, news, scores and updates, be sure to follow everything Bradley Basketball on Twitter with our Assistant Sports Editor @AaronFreem.