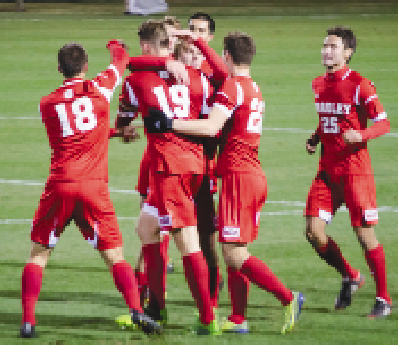 The Braves were faced with winning three games in five days in the Missouri Valley Conference Championship to keep their season alive.

The positive was the tournament would be played on Bradley’s home field at Shea Stadium.

The negative was after opening round matchup against Evansville, the Braves would have to face No. 2 seeded Drake and likely the conference champion Missouri State, both of whom beat DeRose’s squad in the regular season.

To top it all off, if the Braves happened to make it to the championship game they would be playing their sixth game in 15 days. That’s one-third of Bradley’s season packed into two weeks.

The team’s goal was to take it one game at a time. A 3-2 double overtime victory over Evansville? Check. A 3-0 shutout of Drake to advance to the championship? Check. And finally a 1-0 victory over Missouri State to seal the program’s third NCAA tournament birth in four years? Check.

DeRose said he has a lot of proud moments in his 18-year tenure as the head man for the Braves, but that this one ranks right up at the top.

“It is the fact of their resiliency and it was incredibly humbling how hard those guys worked because they had to battle so many minutes in so many days,” he said.

“We’re very fortunate to be playing again. I think what this group has been able to accomplish certainly says a lot about the young men in this program and their commitment to winning.”

It took a total team effort for Bradley to hoist its’ second conference championship in four seasons. There was contributions across the board. Senior Wojciech Wojcik provided three assists and freshman Christian Okeke had two goals in the win over Evansville. Junior Cody Lofgren had just one goal all season then had the game winner in against the Purple Aces and Drake. And finally, the defense led by goalkeeper Brian Billings notched two shutouts in the semi-finals and finals to get the Braves into the NCAA tournament once again.

Billings for his effort was named the MVC tournament MVP. DeRose had high praise for his senior captain.

“If I had to win one game there isn’t one goalkeeper I would take over Brian,” he said. “A lot of coaches would say that about their guy, but I think there’s a lot of other coaches in the country who feel the same way [about Billings]. I certainly think every time we line up with Brian in there we have a chance.”

So after four months of blood, sweat and hard work the Braves get to keep their magical season alive. The team had a rematch in the first round of the NCAA tournament last night against Northwestern. Bradley beat the Wildcats 3-2 in overtime on Oct. 2. With a win, the team will face California on the road on Sunday.

DeRose said he tells his teams every season to build a legacy. The Braves have done just that and the story isn’t finished quite yet.