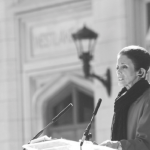 One of the university’s most prominent leaders will step into the spotlight next week to give students some important leadership advice.

Bradley President Joanne Glasser will speak at the National Society of Leadership and Success (NSLS) speaker broadcast event at 7 p.m. Wednesday in the Marty Theater.

Glasser is set to speak on “Servant Leadership: Leading Not to Help Just Yourself, but Others.” NSLS President Celine Hartman said she is excited about hosting Glasser as the organization’s speaker this year.

“We chose President Glasser because the executive board believes she is a very successful person on campus, [one] from whom we could all learn,” Hartman said. “We also don’t have many opportunities to hear her speak on campus, so we thought it would be enjoyable.”

“President Glasser, as well as everyone in the education field, tries to make leaders who can go out and help themselves in the real world,” Blumenthal said. “Education is a profession where it is all about others and not just yourself.”

Following Glasser’s speech, there will be a brief question and answer session with her, in addition to three career peer advisors speaking briefly on networking.

The event, which is open to all students, faculty and staff members, is one of the formal steps for NSLS induction.

“NSLS is basically an organization that promotes students to be leaders and more successful in their future endeavors,” Hartman said.

The Bradley chapter of NSLS consists of nearly 800 members, despite only being on campus for the last three years. Members have the opportunity to work with the 13-person executive board, earn chapter and national scholarships and connect with community and faculty members.

Hartman said she hopes the president’s speech will inspire students to make a connection with her.

“We hope that students can relate to her and really appreciate the message she will give,” Hartman said.