SHOW US THE MONEY: Bradley salaries in 2011 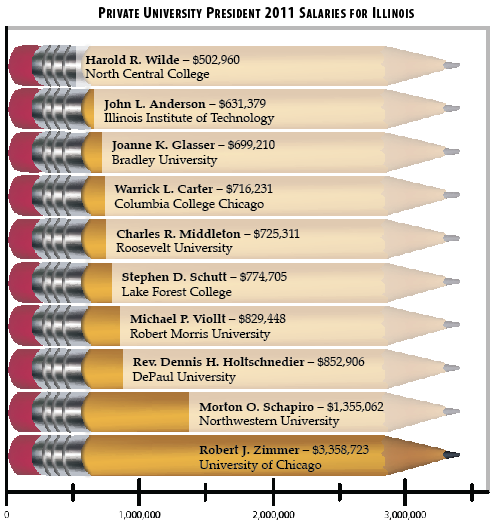 This is the most recent data available from the federal Form 990s that universities and other not-for-profits must file annually with the Internal Revenue Service. The data is posted on the Chronicle of Higher Education website.

Glasser’s base pay increased by nearly $60,000 between May 21, 2011 and the same data in 2012. Her base salary of $456,077 includes sick pay from the university and employer contributions to a retirement plan. The rest of the president’s salary includes bonus pay, deferred compensation and nontaxable benefits.

Chairman of the Board of Trustees Bob Turner said compared to other institutions similar to Bradley, Glasser’s salary is comparable.

“We try to find a clear comparison of the universities similar to Bradley, and we personally put her at the top [of the pay scale],” he said. “She’s proven after seven years that she’s a great leader at Bradley. I see our president as a great organizer with a great community she supports.” 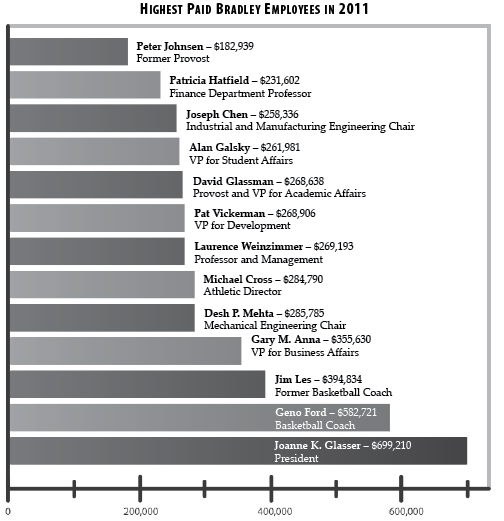 University Spokesperson Renee Charles said Glasser’s salary is selected by the board’s Compensation Committee and is based on performance and meeting the Board’s goals and expectations.

“It is the judgment of the board that her compensation is competitive and reasonable considering her duties, responsibilities and performance,” Charles said.

Les was hired as the University of California-Davis head coach afterward but threatened to sue Bradley in July 2011, saying he still had three years to go on his employment agreement. Bradley’s obligation to Les was based on differences between his Bradley salary and what he would earn at UC-Davis, which was about $425,000 a year, he maintained.

Les isn’t the only former Bradley employee who was still on payroll. Peter Johnsen, who was Provost and Vice President for Academic Affairs from July 2006 to July 2008, was paid nearly $183,000 in 2011, the fourth year after he and the university severed ties.

Vice President of Business Affairs Gary Anna said the payments like those to Johnsen isn’t uncommon at universities. 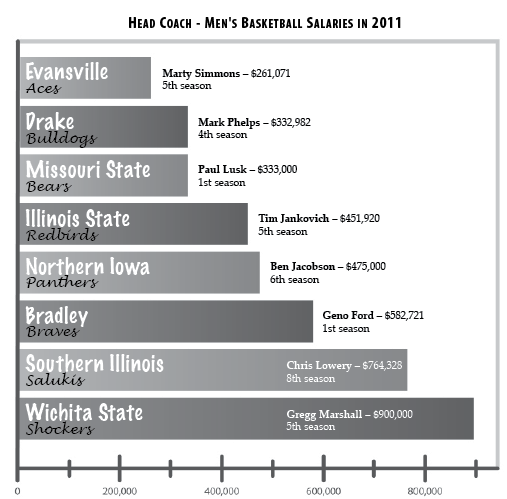 “Dr. Johnsen finished his service in the summer of 2008, and he had some accumulated pay due to him,” Anna said. “The amounts on this report are on a cash basis … and would be carried out over a period of time. Sometimes that happens when there’s a change of employment like those and you’ll see that at a lot of places.”

Johnson received no further payments and therefore was no longer reported on the 990 in 2012, the data for which will be publicly available this fall.