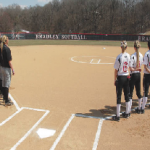 The Bradley softball team dug itself an early hole and could not get out of it, losing to Southern Illinois-Edwardsville 5-3 Tuesday afternoon at Laura Bradley Park.

The loss dropped the team’s record to 20-15 on the season.

The Braves fell behind 4-0 after a three-run third inning for the visitors, but the team fought back and made it a game.

BU scored to make it a three-run deficit in the bottom of fourth on a single by freshman Kathryn Spenn. The score stayed the same until the top of the 7th when SIUE added an insurance run to make it a four-run lead heading to the bottom of the inning.

Junior Mariah Cole began the home half of the 7th with a single and sophomore Shannon King also singled to give the Braves life. Then junior Madeline Lynch-Crumrine singled home both Cole and King with two outs to bring the tying run to the plate for Bradley.

But BU couldn’t complete the comeback as freshman Rachel Huggins flew out to deep left field to end the game.

“I think a lot of people would probably just look at the score and see a loss in the column,” coach Amy Hayes said. “For us, we actually had a lot of really good things happen. We battled back in the 7th again which shows we got good fight. Some of our hitters in general looked more comfortable in the [batters] box than they have the last couple weeks. I think there were intangibles there that the fan doesn’t really notice but for us we actually got some things accomplished.”

Hayes said she was proud of the team for battling back after the rough start to the game and that toughness is a good sign going forward for the rest of the season.

“It’s good to know they believe they can win,” she said. “To show that fight and not just lay down I think is really important. It’s something this program has struggled with a little in the past. We’ve got that belief going and that’s exciting.”

Junior Brianne Joseph and sophomore Alyson Clemente each had two hits for the Braves who had a total of nine on the afternoon.

Senior Mackenzie Camp struggled on the rubber giving up four runs in 2 1/3 innings. Lynch-Crumrine came on in relief and gave up just one run in 4 2/3 innings.

Bradley returns to action tomorrow with a double-header with conference foe Evansville on the road. The two teams will meet again on Sunday.