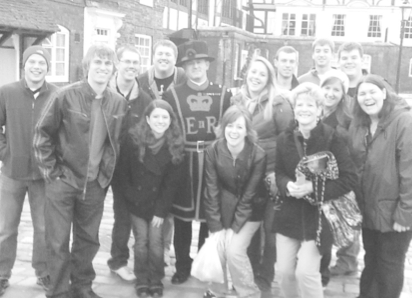 One of the most valuable experiences a student can have during college is studying abroad.

“There were 150 students who went to either Paris or London for the January interim,” communications professor Jan Frazier said. “It was truly the most incredible trip that I’ve ever had with students. Absolutely amazing. The students and I had class every day, and then we planned our day. Together we chose where we wanted to go, and then they had alone time.”

Frazier said Bradley paid for several of the trips her class took.

“The students chose to have Bradley pay for our trip to Stratford Upon Avon to see Shakespeare’s home and Warwick Castle in Warwick,” she said. “They also chose for Bradley to pay for a Beatles walking tour and Jack the Ripper walking tour. All of the Bradley students went to see Noises Off at the theatre one night, which was great.”

“It is one thing to learn about Shakespeare’s Globe and his home of Stratford Upon Avon in the classroom,” she said. “It’s an entirely different sensation to walk the same streets Shakespeare walked and see the stage where his famous plays were performed. Studying abroad brought to life the stories, such as those of Shakespeare.”

“The most pronounced experience was seeing history with my own eyes,” she said. “It’s hard to imagine the impact coming into contact with historic buildings. The most inspirational [part] to me was going to Churchill’s War Rooms. You literally see the rooms set up the way they were during the blitz. It was magical seeing the Houses of Parliament and Big Ben lit up at night for the first time.”

McNamara said experiencing a new culture was the greatest reward of the trip.

“[The culture] has made me appreciate my life in America more, but it has taught me some of the ways America is not always the best,” she said. “It’s sort of funny, but one of the things I missed the most was variety in my breakfast. By far though, the worst was the lack of wifi access. I took it for granted in America. Our lives seem to revolve around the Internet.”

“I learned so much, not only in class, but also outside in reality,” she said. “After two days, I was completely comfortable riding the tube and felt like I really fit in. I made so many new friends through this trip. I’m glad that I not only had the experience of a lifetime, but I made friendships that will continue throughout my school career. I’m looking for internships overseas right now, so I will definitely be back over there soon.” Junior social studies secondary education major Allison Newman said she would love to study abroad again.

“London was incredible,” she said. “I have never felt this comfortable in a city before, and that was the one thing I did not expect. I knew I was going to love it because of the history. If I could study abroad again, I would because it’s so interesting to learn about other cultures.”