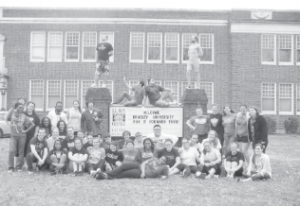 Many students returned to campus this week with tan lines and tales of parties from Spring Break.

But for 39 Bradley students, the break was an experience of volunteering, leadership and community building with Students Today Leaders Forever.

STLF is a nonprofit organization founded in 2003 at the University of Minnesota. Its purpose is to replace the typical college vacation with service projects during the break.

Sophomore nursing major Brandis Holloway brought STLF to Bradley’s campus last year after she saw a flyer for it in her Spanish class. After she contacted the number on the flyer, which was for Illinois State University’s chapter of STLF, Holloway coordinated a Bradley tour with Western Illinois University.

“There were eight [Bradley students] that went last year,” she said. “We didn’t really know each other then.”

Holloway and sophomore secondary education major Molly Moriarity, both co-presidents of Bradley’s STLF, said they had an incredible experience in 2011 and decided to make it annual. Moriarity said they publicized this year’s Pay it Forward Tour through the Activities Fair, word of mouth and informational meetings to bring in more participants.

Junior secondary education major Lauren Cassidy said the organization was even featured on the Mobile, Ala., news.

“We helped at a Boys and Girls Club Camp,” Cassidy, also a co-president, said. “We helped do yard maintenance, clear trails and worked on some of the buildings at the camp.”

The four co-presidents, including sophomore special education major Sam Babb, had their fair share of laughs among the service projects. One night in Montgomery, the co-presidents were cooking dinner for the Bradley chapter participants when a fire alarm went off and the entire building had to be evacuated.

“It was even more embarrassing when one of the Girl Scout mothers came to us with cookies,” Cassidy said. “She brought us [the cookies], saying she was sorry we burnt our dinner and hoped [the cookies] would feed us at least a little bit.”

The tour had one bus, enough to hold all Bradley participants, but another bus may be added for next year if interest grows.

“We’re going to try and get two buses for next year,” Moriarity said. “I think it’ll be great and it will help with fundraising.”

Moriarity said the $450 per person fee may have scared away students, but said it is put to good use.

“The money pays for the nine day trip and includes food, housing and transportation,” she said. “Compared to [a trip to] Panama City Beach, it’s not bad.”

“It was a life changing experience,” she said. “I’d love to do it again. I’m now friends with everyone  [who was] on the bus.”

Holloway said she was pleased with the large number of participants this year, since 10 people had signed up with only a few weeks before departure.  She said she doubted the first bus would leave and was surprised it was full by Spring Break.

“I was amazed with all the participants,” Holloway said. “It was way beyond my expectations. It was more than I could have hoped for.”