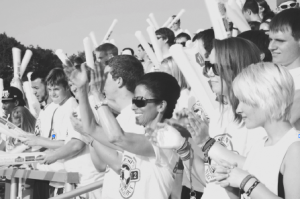 The Braves dominated on the field and in the stands at Shea Stadium last Friday for Bradley’s annual President’s Night Out and soccer’s home opener.

In the past, the outing has been hosted at a Peoria Chiefs baseball game.

However, the Chiefs were traveling during Bradley’s Welcome Week this year and Associate Vice President of Communications Shelly Epstein saw the potential setback as a chance for something better.

“With a home soccer game scheduled, it was a great opportunity to introduce freshmen to our team and to Shea Stadium,” he said.

Roughly 1,000 freshmen were invited to the game. All of the students had accessible transportation to and from the event on charter buses and the freshmen who attended Bradley’s Freshmen Convocation were given free tickets, t-shirts and meal vouchers.

“The President’s Night Out is another way for students … to become a fan of our intercollegiate athletic teams, and to foster pride in our university,” said Epstein.

Encouraging student involvement isn’t the only goal of President’s Night Out.  More than 150 freshmen mingled through the pregame activities before going in to Shea Stadium, meeting new friends and building relationships with others.

“I came with my friends because I got the free ticket,” said freshman business entrepreneurship major Ulysse Bergquist. “It’s a fun thing.”

In addition to a rise in university pride, bringing President’s Night Out to soccer games is beneficial to the crowd sizes. Senior elementary education major Amber Bradley worked the front gates as a ticket taker, counting every student that entered.

According to Bradley, about three times as many students went to the opening home game than a typical Braves game.

“I’m guessing it’s because of the free meals and tickets [are already free],” she said. “There are a lot more students out there tonight.”

But the upturn in student attendance may not end in the first game.

Epstein said he encourages freshmen to continue supporting the Braves.

“Events like this are part of the college experience that our freshmen are now embracing,” he said. “Students always have a great time cheering for the Braves with President Glasser.”