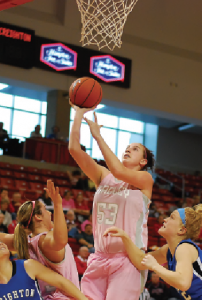 The Bradley women’s basketball team is returning nine of its top 10 scorers from last year, after finishing with a 15-16 record and 7-9 in conference action.

“We are working really hard,” senior forward Mackenzie Westcott said. “I think we have a lot of experience on this team with five seniors. [This season] will be really good with a lot of leadership, and the freshmen are bringing a lot of intensity and competitiveness.”

Although Bradley is bringing nearly the entire team back after a .500 season, the Braves were ranked eighth in the preseason conference poll.

“That’s not our motivator,” coach Paula Buscher said. “Just because people picked us eighth [in the poll] is not what is going to motivate us through the season. Give me the end of season rankings, we’ll talk then.”

Junior guard Katie Yohn is the team’s top returning scorer after finishing last season averaging 12.4 points and 4.1 rebounds per game. Yohn was also second on the team in steals and assists.

All of the seniors, Westcott, guard Hanna Muegge, center Latasha Hollingshed, center Leah Kassing and guard Lauren Niemiera contributed to more than 46 percent of the offense last year. Westcott led the team in steals (60) and blocks (34), while Hollingshed led the squad with 6.4 rebounds per game. Muegge started at point guard last season and was second on the team in 3-point percentage (.382).

“This is a long season and you want to come out of the gates ready, but the most important thing is that you are finishing strong,” Buscher said. “I think that’s where the upperclassmen are really going to help.”

Sophomore point guard Kelsey Budd started 11 games last season, and finished fourth on the squad with 44 assists despite only averaging 16.8 minutes per game. Sophomore forward Kelly Frings came off the bench in all 31 games and set a Bradley season record with a 43.1 3-point field goal percentage.

Freshmen guards Michelle Young, Shronda Butts and Fantasia Vine are expected to contribute this season. Butts scored seven points in the second half in the team’s annual Red-White Scrimmage. Sophomore guard Catie O’Leary, a transfer from the University of Wisconsin, sat out last season due to the NCAA transfer rule and is ready to contribute after a year on the sidelines.