Genders learn about each other at ‘That’s what she said’ 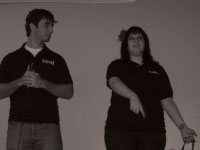 A recent Help Empower and Teach program gave students a chance to ask their most burning questions about the opposite sex.
“That’s What She Said,” hosted in the Marty theatre on March 11, included raffles, a panel of experts and anonymous questions students wrote down as they arrived. Boys were given blue slips of paper and girls were given pink, and the questions were mixed together before being chosen and asked to the room.
Students, HEAT members and a panel of experts including department chair of psychology David Schmitt, Medical Director of the Health Center Dr. Jessica Higgs and Planned Parenthood representative Saundra Powell collaborated to answer each question.
Throughout the evening, prizes such as the games Apples to Apples and Battle of the Sexes were raffled off. At the end of the presentation, students were given gift bags containing condoms and candy to take home.
Students asked questions ranging from “Threesomes? Yes or no?” to “Do those penis enhancements really work?” to “What is the most important characteristic in a partner?” Students gave their opinions and experts added knowledge from their fields.
“There is one phrase that comes up again and again across cultures when people are asked what they want in a partner,” Schmitt said, when asked which characteristics are vital to a relationship. “That is kindness and understanding.”
He said if a man is narcissistic he may be likely to have more partners but struggle in long-term relationships, and a woman looks for someone who stands up to others but is kind to her.
When a question about women’s behavior during Spring Break came up, one student said “Costa Rica may happen once, but herpes is forever.”
Students said the anonymity of the questions allowed them to be as open as they wanted.
“I liked that we could just write the questions down,” senior computer science major Malcolm Hemmings said. “It made everyone more comfortable to ask whatever was on their mind.”
Hemmings said the most valuable information he learned came from Powell when she informed students that lubricants, unless they are water based, are not safe to use with condoms.
“That’s just not something you typically figure out on your own,” Hemmings said. “I learned a lot of information here that I was really surprised to find out.”
Senior sexual health chairperson for HEAT Casey Stark said the point of the presentation was to stress the value of communication before having sex.
“We did something similar to this in 2007 called Sex and Chocolate, but we decided to revamp it a bit,” she said. “They do this in the EHS classes, but we wanted to bring in the panel of experts. We wanted to get people talking so they could understand that communication before sex is really important.”
Stark said because every question was not answered, the HEAT fan page on Facebook will post questions as a discussion, and the panel of experts will answer them as well.
More from NewsMore posts in News »