Tennis season comes to a close at the MVC Champioships 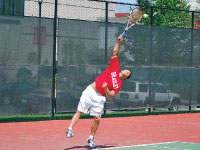 Six seniors ended their college tennis careers at the Missouri Valley Conference Tournament in Wichita, Kan., on a sour note as the women and men’s tennis teams went a combined 1-8.
Coach Scott Petersen put things in perspective when he referred to his trio of graduating women.
“Overall, as people they have shown caring and compassion for their teammates, the community and the university,” he said.
The lone victory came not from a senior, but the up-and-coming freshman Eric Nguyen. Following a victory in the regular season finale that required a tiebreaker, Nguyen was able to transfer his momentum and control both sets 6-2, 6-1, against Drake’s Ryan Drake.
The rest of the men’s team did not have such success. Freshman Juan Cuadrado rebounded from a near blowout in the first set, but still lost both 6-1, 7-5. Senior Callen Fraychineaud’s best effort couldn’t stop Jean Erasmus who ended up victorious 6-4, 6-3.
The losing pattern continued as freshman Brock Reiman was blasted by Jonathan Hadash 6-1, 6-2.
Bradley’s No.1 pair of Fraychineaud and Reiman was cut short by Drake’s Mauricio Ballivian and James McKie, 8-4.
The senior tandem of Milos Romic, who had just earned a spot on the MVC Tennis Scholar-Athlete Team, and Robert Richardson came within the brink of victory but fell just short to Erasmus and Jonathan Hadash, 8-6.
The men played until Drake reached four wins.
The men’s team ended the season with a record of 7-16 and a last-place finish in the conference.
Next season will be a reconstruction process for the men. Losing three senior leaders while returning only one upperclassmen, junior Trevor McGrath, current freshmen Reiman, Nguyen and Cuadrado will have some big shoes to fill.
The women did not fair any better at the MVC Tournament. The women faced the No. 1 team in the Valley, the Wichita State Shockers, who were perfect in Conference play.
The senior pair of Kelly Donahue and Jessica Buterbaugh was shut out by Florentina Hanisch and Lenore Lazaroiu, 8-0.
Junior Nicole Miller and senior Emily Regenold couldn’t keep up with Lutfiana Budiharto and Stephanie Dalmacio and were handled, 8-1.
The singles side was as bleak as the doubles. Delia Damaschin of Wichita State cruised over Buterbaugh, 6-0, 6-1. Freshman Kennedy Scott was blanked by Hanisch, 6-0, 6-0. Fellow freshman Brigitte Graf avoided the shut out but lost to Lily Wakim, 6-0, 6-2.
This gave Wichita State four wins to close it out.
The women ended their season with a record of 5-16 and a last-place finish in conference.
This marked the end of their college careers for Buterbaugh, Regenold and Donohue.
“Thank you and continue to be who you are, outstanding individuals,” Petersen said to his seniors. “These three young ladies have helped the program move in positive direction in so many ways both on and off the court.”
Next year the women’s team will bring in three new freshmen from Minnesota, Indiana and Ohio.
Petersen said the new recruits have “many years of experience and state titles to their names. Having these three players plus the current returning players will make next season very interesting, because there will be a learning curve for the freshman, and continued development for the returners.”
That does not mean expectations are low, to the contrary actually.
“The expectations are high, to build on what is already here and move toward an opportunity to play for a championship,” Petersen said.
More from SportsMore posts in Sports »