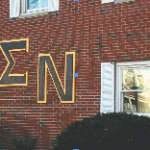 For generations, greeks have had the harmless tradition of stealing items from their fellow Panhellenic Council (PHC) and Interfraternity Council (IFC) members as a joke, only to later return the items.
Members said they have stolen the occasional small memorabilia item as a prank, but as of late, expensive items, ritual materials and vandalism have become of great concern to the greek community and to the university.
“This is the only campus I have ever been a part of that takes greek heritage items from other greeks and [hands] them down without the intention of ever returning them,” Director of Student Activities Tom Coy said. “It’s gotten to the point where people have stolen major items of significant value that equate to felonies, or the few items that were found or returned were completely destroyed.”
Every chapter of IFC and PHC has reported theft on some level within the past year. Some have suffered more than others.
“We had the ‘L’ off of a relatively new sign we hung on our house taken twice,” said Sigma Delta Tau member Ellie Silver. “Also, our house mom had purchased a very nice patio furniture set, and the table, all the chairs, the umbrella and even the rug it was on top of was all taken.”
In addition, several fraternity houses reported numerous items stolen from both the inside and outside of their houses, resulting in frustrated members and investing in more significant security measures.
“We open up our house for social events and in return, ‘guests’ steal from current brothers of the house,” said Alpha Epsilon Pi president Scott Pfeiffer. “Many objects within the house have no value other than sentimental, and it’s a shame that someone would steal them. While we do have cameras in place, they do nothing to stop the bigger problem.”

Delta Upsilon member and new IFC president Travis Cazel also shared the concern.
“IFC is strictly against theft of any kind, but we understand that it comes from a deep rooted cultural tradition that has just for whatever reason gone from silly pranks to malicious theft and vandalism,” he said. “We are working on a plan to help get items returned and prevent further theft.”
As the years have past, the intensity of the greek theft has gone from stealing a tumbler with the greek chapter’s name to stealing large composite pictures, trophies, refrigerator parts, cash and furniture.
“This is a different time period than when it was acceptable to do this type of stuff,” Sigma Nu president Drew Blumenshine said. “We need to come together as one and have healthy rivalries that promote greek life rather than pulling stunts like stealing property that only irritate people.”
“Amnesty Day” is being organized to allow greeks to return stolen items and start with a clean slate.
“Bradley alumni give back to the community and to greek life consistently,” Coy said. “When they come back to visit their house or Bradley, they want to see the legacy they left. It’s disrespectful to other people’s greek letters when you take what isn’t yours.”