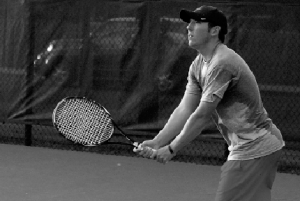 Accustomed to dominant performances this season, the men’s tennis team hit a collective wall last weekend when a trio of players fell in the first round of the ITA All-American Championships.

Sophomores Justin Abrams and Ashton Kalhorn lost in their first matches along with freshman Ahmed Al Bitar, while sophomore Juan Cuadrado had a first-round bye.

“I hope we learned a few lessons when we competed,” coach Jesse Plote said. “We can learn and grow from those experiences.”

Al Bitar started off his match in control of Liberty’s Jorge Zuero, with a win in the opening set 6-2. After a quick start, Bitar fell in the second set 6-4. The third and final set ended much like the second, and Bitar was defeated.

Despite the loss, Al Bitar’s season has been a strong one, with an overall record of 8-1 in singles competition.

Abrams walked into his match with a perfect record on the year. His undefeated mark was lost when SMU’s Tobias Flood used three sets to topple Abrams. After losing 7-6 (10-5), Abrams’ bounced backed to beat Flood 6-4 in the second set. Abrams momentum ended shortly thereafter as Flood put an end to the match with a dominant 6-3 win.

Kalhorn was the only player not to win a set over the weekend, as Radford’s Thomas Dehaen swept the sophomore. While neither sets could be considered a blowout, Dehaen was too much for Kalhorn to handle.

“I hope the guys on the team build from this point forward,” Plote said. “I will tell you that we have something special this year if we can transition our games and push each other to be the best they can be.”

Cuadrado’s first-round bye meant he would have to face Middle Tennessee State’s  Ettore Zito. Cuadrado swiftly pushed Zito to the side with a 6-1, 6-3 sweep.

In the third round, Cuadrado faced Lars Behlen, a member of Baylor University’s nationally-ranked men’s tennis team.  Competing against one of the top freshman in the nation, Cuadrado dropped both sets 6-4.

With the loss, Cuadrado’s record stands at 7-2.

The Braves will return to Tulsa, Oklahoma Oct. 20 to take part in the ITA Regionals for the final event of the calendar year.