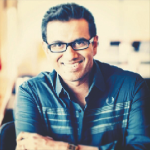 Out of the ashes came a vision. Out of the destruction came a way to rebuild. Out of a day that “changed America forever” came a change of heart. Out of a day marked by death came a purpose for life.
On Oct. 24, Campus Crusade (Cru) hosted Sujo John, a Sept. 11 survivor turned international evangelist, for a speech focusing on his survival of the terrorist attacks and his subsequent reconnection to God.
Sophomore and Cru member Jaylyn Cook said John has spoken at Cru events across the country, and his message is important for college-aged students.
“It’s important for others my age to hear stories such as Sujo’s for the sole purpose of provoking thought about the direction our own lives are heading in,” Cook said.
Born in Calcutta, India, John grew up in a Christian home but said he did not have a strong relationship with Jesus. During his childhood, he lost his 9-year-old sister to leukemia and questioned God’s presence in his life.
“I used to wonder ‘why is there death and suffering?’ and ‘if there is a God, why doesn’t he step in?’” Sujo said.
When he was 15, a missionary at a Christian youth group service changed John’s perspective on God by saying that Christianity was not a religion but a friendship God offers to mankind. While John said he “met Jesus” following that speech, he still felt a drive to do more and build a stronger relationship with God.
Years later, in February 2001, John said he still battled with his spiritually when he came to America with his wife Mary, $50 and two suitcases.
“Everything seemed to be going well with both of us finding jobs in America and us expecting our first child, but I had a deep spiritual crisis,” John said. “I was a closet Christian.”
That inner crisis led him to send an email regarding his want to do more through God’s call in his life to a church friend around 8:05 a.m. on Sept. 11, 2001 from his office on the 81st floor of the North Tower of the World Trade Center.
Less than an hour later, American Flight 11 crashed into the North Tower, and John found himself climbing down flights of stairs amidst fire and debris. As he made his way down the stairs, he said he recalled passing rescue workers.
“Policemen and firemen were making their way up the stairs … making their way to death,” Sujo said. “They were living out John 15:13, ‘No one has greater love than this, to lay down one’s life for one’s friends’.”
The moments that followed getting out of the North Tower were filled with uncertainty, John said. He was unsure if his wife, who worked in the South Tower, was alive and, when the South Tower collapsed moments later, John found himself buried in debris.
Eventually he received a call from his wife, who was alive.
“The enemy had death written all over our story, but [God’s] mercy spared our lives,” John said.
Since Sept. 11, John has focused his life on sharing the Gospel. He has launched an international evangelistic ministry, Sujo John Ministries, and made appearances around the world sharing his story. He has also authored a book and started an anti-human trafficking movement, youcanfree.us, to share the goodness and hope of God.
“You never know how much one moment can change your life,” John said.
John said that individuals come into this world with nothing and leave with nothing. He challenged those who attended his speech to examine their own lives as Christians and to live and share the Gospel.
“What if you go to bed tonight and don’t wake up? Are you absolutely sure where you are going to spend eternity?” John said. “God’s dream is you, and what He gave you, the world cannot take out of you.”