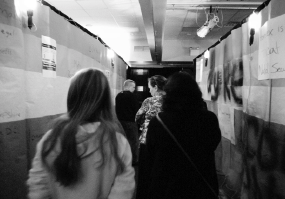 Martin Luther King, Jr. once said, “The ultimate tragedy is not the oppression and cruelty by the bad people but the silence over that by the good people.”

The Tunnel of Oppression, hosted Wednesday and Thursday in the Student Center Ballroom, was created to expose students to the brutalities that befall not only the past, but the present.

Groups of 20 students at a time began their journeys inside a small, dark space with nothing but a flashlight to guide the way. A tour guide narrated the entire exhibit.

“This small room represents our worldview and how small it is compared to the rest of what the world has to offer,” one guide said.

Slowly, students filed out of the room, through the black curtains, and into the start of the Tunnel of Oppression.

The tour guide led the students around the corner and into the tunnel of the Holocaust. Images of decrepit bodies, clothing marked with the gold star and swastikas spray painted all around visibly affected the groups as they passed.

A wall of Islamic stereotypes, the Trail of Tears and a homophobia tunnel were all added to the experience and heightened emotions until the group reached the Wall of Immigration.

“Get against the wall! Over there, now! Down on your knees!” yelled two women in camouflage uniforms. “Now, recite the Pledge of Allegiance! Where is your green card?”

The tunnel was meant to imitate the experience foreigners have while looking for a fresh start in America.

The tour continued, as the group passed through more dark tunnels displaying lynching, unemployment, cyber-bullying and depression. Images of murdered African Americans, a woman begging for change, stories of cyber-bullied victims and suicide letters written to parents as a last goodbye filled the walls.

The next tunnel was empty, except for a young girl in a wheelchair.

“I have given each of you a card,” said one guide. “Each is a word that is a stereotype of disabled people. It may not be spoken out loud, but it is thought. Place it around the neck of the woman and think of what it means.”

Each student walked up and hung words such as “ruined” and “incompetent” from the neck of a girl seated in a wheelchair, looking downcast and demeaned. She stayed quiet and avoided eye contact as each member proceeded to place a sign around her neck.

The tour ended at a tunnel of human trafficking, walls filled with women and children used and forsaken.

The Tunnel of Oppression left the students in shock. To confront the emotions felt by the students, the group met with Jesse Koch, associate director of fraternity and sorority life, and Nathan Kramer, assistant director of campus recreation, for a debriefing session on what they had just seen, heard, and felt.

“I think the biggest impact this had on me is how so many people can relate to at least one of the statistics we saw today,” said sophomore accounting major Victoria VonBergen. “If you add all of those statistics up, that affects a majority of the U.S. population. You never think about that.”

Other students said the visuals of the Tunnel were the most moving.

“The video presentations and images really put you in their shoes,” freshman biology major Mitchell Liss said. “I think the biggest word here is empathy, experiencing what they went through.”

Upon completed discussion, the group was dismissed, yet students said the motivation to make a change inspired them as they left.

Senior marketing major Chris Stephens said he went through the Tunnel of Oppression his freshman year at Bradley.

“It really opened my eyes to the cruelty in the U.S. and throughout the world,” he said. “When I heard it was coming back this year, I was [really excited] to participate. I played the role of Pat the homeless person.”

Stephens said he encourages students to participate the next time the tunnel returns to campus.

“What I would say to anyone reading this is that if you didn’t get a chance to see it, I hope you’ll come next year,” he said. “This was a huge eye opener for me. I know it will open your eyes too.”