Tupuritis leads Braves on the court 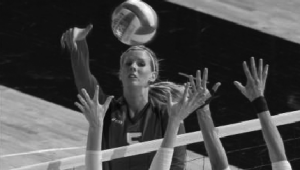 The Bradley Braves volleyball team has high hopes for this season, especially after a five-match win streak to start the season.

If the team is going to be successful this year, Alise Tupuritis, a junior outside hitter for the Braves, will be in the thick of things. Tupuritis, who led the team with 276 kills last season, is certain about the team’s chance of success.

“I think we’re definitely making it to the conference tournament,” she said. “We’re not making it an option, it’s a priority.”

Born in Evanston, roughly ten miles away from Chicago, Tupuritis grew up in Des Plaines.

“We had a lot of neighborhood friends we played outside with all the time,” Tupuritis said. “We were a very active family. We played basketball, softball, baseball, soccer, everything. You name it, we played it.”

Tupuritis said that towards the end of middle school she began to make volleyball her focus.

In seventh grade, she attended a University of Illinois volleyball camp, which increased her interest in the sport. In eighth grade, she played for her middle school team, but once she got to high school she joined a club team until her sophomore year. At the beginning of her junior season, she looked for a higher level of competition.

“I switched to a more elite club – First Alliance – played there my junior and senior year and that’s where I started peaking and getting looked at for college volleyball,” she said.

In college, as with many athletes, things have not always been easy for Tupuritis.

“My most challenging time would be when I had shoulder surgery my freshman year,” Tupuritis said. “That was rough, because I had been starting the first nine games that we played. I’m a really impatient person and obviously I wanted to be out there playing. It took me a long time to come back from it, even when I was cleared to play.”

Tupuritis admitted that it got so tough that, “There’s definitely times where I wanted to quit.”

However, she credits her teammates and the training staff to helping her get through the injury.

“I had a lot of support,” Tupuritis said. “I did a lot of rehab with the athletic trainers here, and I had my teammates. I had a very good support group.”

Braves fans should share in Tupuritis’ thankfulness for the staff and her teammates, because without her, the Braves would face an even tougher challenge on the court.

Even with two recent losses, Tupuritis is optimistic about the volleyball team’s potential this season.

“I think it’s going to be a great season,” she said. “I think everyone should come support us.”

Tupuritis sees the Braves in the conference tournament at the end of the year. If she stays healthy and continues playing well with her teammates, the fans may see them there as well.