A stranger in a strange land: The story of a German immigrant 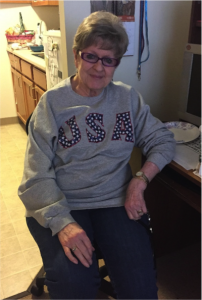 The issue of immigration has always been relevant throughout our country’s history, and it has grown exponentially in recent years.

My grandmother Renate Wallenmeyer, who is turning 82 this December, immigrated to America almost 60 years ago. She was born in Bremerhaven, Germany, Dec. 13, 1934. When she was a young girl, a bomb from the Allied Powers exploded on Wallenmeyer and her family’s home. As a result of this traumatic event, she grew up to realize she would have a better life and greater opportunities if she immigrated to America.

“While [the immigration process] is inconvenient and tedious, it is a legal process that is expected to be abided,” my grandmother said. “I was told beforehand that you had to know some English … the rudimentary English.”

With this in mind, my grandmother tried her best to perfect her English before her interviews. In Germany, they teach English to students at a young age and most know the basics of conversational English by the time they are adults.

“I had to read some English aloud [during my interview]; I’m so glad that I used to read modern romances and [other English literature],” my grandmother said. “I remember how nervous [I was]. [They asked me] what would I do if I arrived in the United States, and there was nobody to meet me. I said, ‘I don’t know … I would wait for a little while, and if it took too long, I would ask a policeman or someone how to get to the closest phone.’”

Other than that, there were only a few expectations for the immigration applicants: none of your close relatives could be Nazis, and in the 1950s, visas were only given to those with sponsors in America that would be liable for the immigrant.

“You couldn’t just come to this country. I had friends … they lived in Palatine, this friend of mine, she knew a guy … she asked him if he would sponsor me, and he said, ‘OK,’” my grandmother said. “If I for any reason fell [into] hardship, he had to take care of me.”

During the time of my grandmother’s application, she met my grandfather, Donald Wallenmeyer, a U.S. Marine stationed in Germany. They were engaged, but he was not the reason she pursued immigration to America. But, the interviewers were not convinced.

“[They asked] how come I was going [to America] now; I told them that my father wanted me to pave my own way and not be dependent on being shipped over with my husband,” my grandmother said. “[The interviewers] asked if I was going to wait for [my fiancée], and I said, ‘Yes.’”

Considering all of this, they granted her the visa and green card, but it was not shipped by mail. My grandma was forced to travel to the consulate in Hamburg yet again to retrieve it and begin her journey to the U.S. in 1957. She had to leave within four months or else the visa would expire.

“Oddly enough, as it was, there was no one to meet me [when I arrived in America],” she said. “[My sponsor] changed at the last minute and asked his mother to meet me. I came in to New York; I had no idea [about the change of plans]. There [I was], standing with my big overseas cases. I didn’t know what to do. I was a stranger in a strange land.”

Thankfully, it all worked out, and my grandmother was able to live and flourish in America. Knowing the issue of immigration in America now, she said she holds very strong opinions.

“[Back then], there were rules you had to abide by,” my grandmother said. “Coming from Germany and all the European countries, you had to apply for a visa and green card. If you came on a visitor’s visa and you did not return, they would find you. Today, it should be easier to keep track of it because of the computerization, you’d think.”

Now, immigrants don’t even have to speak English to enter America.

“It was a whole lot different to get into this country,” she said. “It was looked at as a privilege … that this country would accept you. Some people did not get accepted, [especially if] there was a Communist or Nazi affiliation.”

As far as gaining citizenship, my grandmother did not get hers until 1985.

“In those days, you had to live in the country for five years, and then you could apply for citizenship, and that took a couple of months,” she said.

She waited to obtain her citizenship because she was nervous about the written and verbal tests, but they weren’t nearly as difficult as she imagined.

“All they asked was that I had to write down a couple of sentences [in English]. That was nothing; I had been here [for almost 30 years],” my grandmother said. “The verbal one was, ‘What day of the week it is, what month is it, who’s the president and vice president.’ In my mind, anticipating [the test] was so much bigger than what it actually was.”

When asked if she thinks she could have passed the test after living only five years in America, my grandmother nodded her head.

“[There is] a study guide and materials to study… No, it isn’t hard to become a citizen,” my grandmother said. “If you don’t try to speak [English], then it would be hard, I imagine.”

When she finally earned her citizenship, there was a formal ceremony.

After the ceremony, her family had a huge party for her, complete with a cake in the shape of an American flag.

Becoming a citizen meant my grandmother no longer had to travel back and forth from Germany to America to get a sale permit and other things. When she went to Germany to visit family while still only having a visa and green card, the process was long and difficult.

“[All I wanted was] to have an American passport and go through those quick lines [at the airport],” she said.

Despite being born and raised in Germany, I have never met a prouder American than my grandmother. She is, and always has been, grateful to live in this country while still taking pride in her German heritage. Legally immigrating to the United States is not as difficult as it is made out to be, and it is all the more rewarding to live in a country in which one has earned all of their privileges.