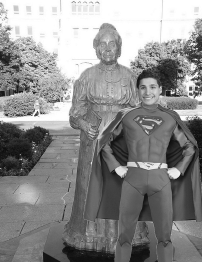 As the sun rose over campus Tuesday morning, students and faculty gawked in horror at the empty platform in Founder’s Circle. The statue of Bradley’s beloved founder Lydia Moss-Bradley was missing.

“I cried. I just dropped my books and cried,” said freshman education major Molly Anderson. “All my friends have a picture with Lydia, and I don’t. Now they’ll think I’m a nerd.”

“If the statue’s gone, what are they going to take a picture of for the cover of the calendar?” he said.

Bradley University Police Chief Brian Joschko said they received an anonymous tip Wednesday as to who might have Lydia.

“We got a note that said, ‘Lydia was part of the one percent, and we need at least one of them on our side. We’re taking her for the Occupy Peoria celebratory parade,’” he said. “We sent out an email after she went missing asking for students to be on the lookout for an angry group of people that they may have seen protesting at Main Street and University Street but we haven’t had any luck so far.”

A rally for Lydia was hosted on the quad Thursday, drawing a crowd of thousands. University President Joanne Glasser approached the podium to speak, but without Lydia there, she said the grief was too immense to address the crowd.

Moments later, Vice President for Student Affairs Alan Galsky took to the podium in a fit of rage.

“I don’t know who took Lydia, and I don’t know what they want,” he said. “But I have a very particular set of skills, skills I have acquired over a very long career. Return the statue, whoever you are. If you don’t, I will look for you, and I will make you answer to the Board of Trustees.”

The crowd erupted into cheers and chants for Lydia to return home, and then began mobilizing to downtown Peoria to stop the parade.

The crowd was headed by Galsky and graduate student Kyle Malinowski, who said he pledged to find the statue, strap it to his back and return it to it’s spot in Founder’s Circle.

“Without the statue, it’s just a glorified parking lot,” Malinowski said. “I refuse to spend the rest of my life at Bradley if Lydia’s not right there with me.”

The crowd descended on the parade, which consisted of one pickup truck with Lydia standing in the back, draped with signs, and forced the car to a halt.

“This community recognizes Lydia Moss-Bradley, and we knew that if she was on board with us, everyone would pay attention,” said Jerry Hines, the driver of the truck. “We’re on our way to some real reform.”

As promised, Malinowski carried Lydia safely back to her platform on campus.

“This is a special, special day for all of us,” Galsky said. “Thanks to Kyle’s bravery, he will have a statue of his own right next to Lydia, where he belongs.”

The statue will be unveiled at noon on May 3. A picnic lunch and luau will follow.