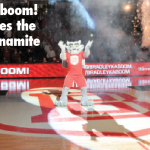 With the help of fireworks, smoke and a Bradley Braves win, Kaboom! the gargoyle mascot debuted at the men’s basketball game Saturday night.

Kaboom! the gargoyle is the first mascot the university has had since 2000, when the Bobcat was eliminated.

According to Kabooms!’s background on the Bradley website, he chose to live on Bradley Hall so he “could fulfill [his] gargoyle duty by watching over and protecting the Hilltop at night.” Kaboom! spent time eavesdropping on classes and sneaking into games at the Robertson Memorial Field House.

But despite his elaborate introduction to campus, Kaboom! was met with starkly mixed reviews from Bradley students.

While about 56 percent of students and Bradley affiliates said Kaboom!’s physical appearance was positive or very positive, around 60 percent said they felt negatively or very negatively about his name. This data was taken from a Scout-conducted online poll of 521 people, 85 percent of which were students (see page A5).

Some students said Kaboom! is good for the university.

“I think his appearance is perfect for a mascot and his uniqueness is what makes him perfect for Bradley,” said senior business management and administration major Allison Lessard. “Who else can say they have a gargoyle as a mascot?”

Senior mathematics and economic major Sean Orlando, who is also a Bradley cheerleader, said he was apprehensive of Kaboom!’s appearance at first when the cheerleading squad was practicing for the game. Orlando said Kaboom! executed his performance, however.

“Bradley knew going into this that it would hit a home run with some and for others it would disappointment,” he said. “Hindsight is 20-20, and I believe looking back Kaboom! will be a great capstone to Bradley’s rebranding goal.”

But some students said the nickname “Kaboom!” isn’t so great.

“I don’t like the fact that the name comes specifically from basketball when the mascot is supposed to represent BU as a whole,” said junior political science and religious studies major Taylor Soto.  “I feel as if it alienates those in other sports and those not involved with Bradley basketball. If we are going to have a mascot, it should be representative of anyone.”

Kaboom! made national headlines as “the most terrifying new mascot in college sports” in USA Today and SB Nation described him as a “horrid gargoyle.”

“They’ve done two years of surveys, they say, and 16 weeks of actual design before introducing Kaboom!,” he said. “In other words, Bradley’s athletic department got ripped off, repeatedly and savagely by some kind of marketing outfitter consulting firm.”

Interim Vice President of Student Affairs Nathan Thomas said Kaboom! will be around a fair amount on campus now, especially after spring break.