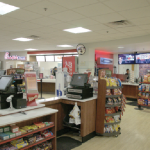 The inspection, which is based out of 100, revealed that the Student Center scored a 77. Points between one and five are subtracted from the total score for violations during the inspection, with the worst violations meriting five points.

“We do not consider a score of 77 to approach our expectations for operation of this unit, or any others,” said Vice President of Business Affairs Gary Anna. “However, it was not a failing grade and operations were not disrupted.”

Anna said it is safe for students to eat at the Student Center.

Anna said the Student Center has since received a better score; however, the Peoria Health Department website does not include the new score.

“Our dining facilities are inspected no less than three times a year and an inspection in mid-February in the Michel Center produced a score of 88,” he said. “Training and attention to safety and sanitation standards has been, and continues to be, a priority.”

The Student Center was the lowest-scoring location on Bradley’s campus, with no other location scoring less than a 91 (Holmes Hall). Shea Stadium, home to the soccer team, scored a perfect 100, while The Stacks in the Cullom-Davis Library scored a 98 and the Renaissance Coliseum scored a 97.

Anna said he doesn’t recall ever seeing a low score at a Bradley facility like this, but the two critical violations at the Student Center were quickly corrected.

“Food sanitation, proper preparation and delivery of meals at all of our dining venues are expected,” Anna said. “It’s a core value and ongoing expectation for our operations.”