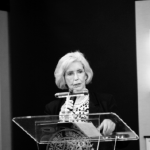 As part of the celebration of the 50th anniversary of the Civil Rights Act of 1964, a modern civil rights activist came to Bradley to speak on fair pay for women.

For 19 years, Lilly Ledbetter served as a employee of Goodyear Tire & Rubber Company. Dedicated to her work and to her family, Ledbetter worked her way up the business ladder until she was one of four area managers.

But in 1998, Ledbetter discovered that her salary was drastically lower than her three male counterparts when she received an anonymous note in her mailbox one day.

“I kept getting promoted,” Ledbetter said. “I even received a top performance award for my work, but my salary didn’t go up.”

Ledbetter went on to explain that her salary, nearly 40 percent lower than her male counterparts, was just the beginning of a long journey.

In March of 1998, Ledbetter filed charges of discrimination before the Equal Employment Opportunity Commission [EEOC].

Upon hearing the news of the charge, Goodyear offered her $10,000 to drop the charges and forget the incident.

“The $10,000 didn’t come close to what I missed out on,” Ledbetter said. “This was going to affect my retirement, my 401K, my Social Security and my family.”

Ledbetter said that $60,000 would have been much closer to the amount she had missed out on because of unfair pay. She took the matter to court, and won with a reward of $3.8 million.

“They came out and read the verdict,” she said. “My attorney told me to not show it on my face or make expression, just look at the wall. I had to sit on my hands because hearing that was when I believed I had won.”

Goodyear, displeased with the results, chose to appeal the case, which ended up making its way to the Supreme Court in 2007.

Justice Samuel Alito and the Supreme Court judges determined that her charge should have been filed within six months of her first paycheck that showed she was paid unfairly.

“Basically they told me that even though I didn’t know I was being unjustly paid, I still had to file a claim within six months of getting that paycheck,” she said.

When she lost the Supreme Court case, she said she felt as if she had hit rock bottom.

“That’s when you separate the real friends from the ones who were only there when they cared who you are and what you have,” she said. “I believe a higher power, family and true friends got me through it.”

Yet, after all Ledbetter had been through, she said things began to gain momentum and started looking up in late 2007.

“I started going back and forth to Washington,” Ledbetter said. “There were Democrats and Republicans sponsoring a bill with my name on it. I spoke twice to the House [of Representatives] and twice to the Senate.”

All of the hard work and persistence paid off, according to Ledbetter. The Lilly Ledbetter Fair Pay Act was passed and signed into effect in January 2009. It was the very first bill President Obama signed.

Ledbetter said it was never part of her plan to have a court case or bill named after her, but it’s all part of the legacy.

“If I can give you kids some advice,” she said, “I’d say get involved, roll up those sleeves and don’t believe everything you hear in the paper or see on TV.”

Ledbetter said she was proud to pass on legislation for future leaders to reflect on and model. She said she hoped that her talk would make a difference, even if only in the life of one person.

“I may have lost the battle, but I have won the war in the long run,” Ledbetter said. “The legacy I left will live on.”