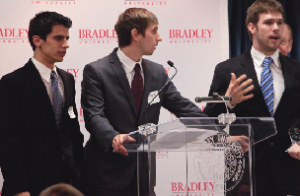 First-place winner Liveable Tech will receive cash prizes and other incentives to help provide financial backing and real-world experience as they launch their business.

Director of Project Springboard Amy Fairfield Doering said this was the project’s sixth edition and the competing teams did not disappoint.

“These projects were phenomenal this year,” Doering said. “Every single one of them was extremely successful.”

Senior mechanical engineering and business administration major Ryan Miller, who is also the CEO of Liveable Tech., said he and his team felt really good about their project going into the competition.

“We’ve been able to work really hard at something we’re really passionate about and create something we feel is really innovative for the market,” Miller said.

By being named top team and awarded the most financial support, Liveable Tech may also receive office space, legal and insurance advice as well as other assistance by program sponsors.

With the money and recognition, Miller said he’s optimistic this is only the start of great things to come for Livable Tech.

“We hope to revolutionize the market [with our design],” Miller said. “We also are going to try and create some awareness as far as where we could be in a few years.”

Senior entrepreneurship major Nicholas Swiatkowski was part of the Swiatkowski Welch Real Estate Project and said it was a huge honor to be considered as a finalist for this year’s competition.

Doering said she hopes Project Springboard will help these entrepreneurs not only realize their dreams, but have the resources to actually achieve success.

This year’s cash prizes were sponsored by Ditch Witch Midwest and the Harbaugh family. Second place and third place winners this year were Apptix and Dress to Impress for Less, respectively.