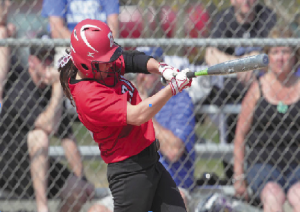 After cruising through the season, the Bradley softball team took a wrong turn last weekend.

Illinois State swept the Braves in their three-game series, including a 5-3 victory in 10 innings Sunday. It was the first time Bradley has been swept in a three-game series since playing Drake on March 25.

“It was unfortunate,” coach Amy Hayes said. “We didn’t come to play. We didn’t follow the plan and we honestly, in a couple of games, didn’t look very good.”

Saturday, I-74 rival Redbirds beat Bradley 4-1 in the first game and 9-4 in game two. In those two games, Bradley’s defense committed seven errors.

“Our defense fell apart on us which hasn’t happened in a while,” Hayes said. “However, I was glad to see them bounce back defensively on Sunday.”

Sophomore Madeline Lynch-Crumrine tossed 10 innings Sunday, striking out four while also giving up 15 hits and five earned runs in the loss. Lynch-Crumrine also received a losing decision in the first game Saturday after tossing seven innings in which she struck out two and only gave up two earned runs.

Wednesday, Bradley lost 4-1 to first-place Northern Iowa, after splitting a two-game series last week, which included a 9-3 victory for the Braves.

The Panthers scored two runs in the bottom of the first inning, before sophomore Mariah Cole drew a bases-loaded, two-out walk to score Lynch-Crumrine for the Braves’ only run in the top of the second inning. Bradley was only able to muster one more hit in the rest of the game.

Lynch-Crumine went 2-for-3 at the plate with a double and run scored, while also tossing 3.2 hitless innings, and recording four strikeouts in the pitch circle.

“It meant a lot to beat Northern Iowa, but in the Missouri Valley Conference you can’t get comfortable,” Hayes said. “The thing about the Valley is anyone can beat anyone and it forces you to come ready to play everyday.”

Bradley stays on the road to face Wichita State for three games starting Saturday at noon, and then going to Wisconsin to play the Badgers at 6 p.m. Tuesday. The Braves will close out their regular season against Southern Illinois in Peoria starting at noon on May 5.

“We are here to win championships,” Hayes said. “The Wichita series is extremely important and we need to go down there and take care of business.”