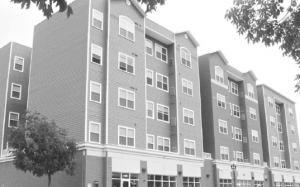 “We would be more than welcome to house freshman, but that is against the Bradley housing policy which requires all freshmen to live on campus,” said general manager Greg Colwell.

“I believe this high retention is a direct reflection of our high resident satisfaction and the quality of our community,” said Colwell. “Main Street Commons has a lot to offer that they can’t find as easily in the market.”

A potential second set of apartments, called “phase two,” is still a possibility for fall of 2013, he said.

“We really wanted to concentrate on making the first building top notch and a priority,” said Colwell. “It is important that we take in resident feedback and gauge the market prior to putting up our second building.”

Colwell said Main Street Commons is priced in accordance to the market, but is constantly gathering resident feedback.

“All inclusive may make us seem more expensive, but once you break down everything added we are an affordable choice in luxury housing,” said Colwell.

Colwell said listening to residents and being market aware will undoubtedly result in a fair rate. Main Street Commons expects to release rates for next year in the upcoming week.