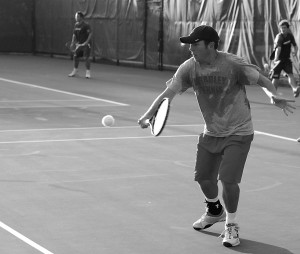 The Bradley Braves men’s tennis team opened with a 30-5 singles record to begin the 2011-12 season after hosting a round-robin style tournament last weekend.

“We didn’t lose a match from the fifth through eighth flight to an opponent,” coach Jesse Plote said. “The depth is scary and we’ll see this [upcoming] weekend how deep we really are.”

Last Friday, Bradley went 16-0 in the Hotels at Grand Prairie Invitational against  DePauw, Lewis, Southern Indiana and Valparaiso, losing only one set total between its nine players.

Although Bradley was nearly flawless  on Friday, the Braves went 11-9 in doubles  Saturday  morning at the Clubs at River City leaving room for improvement.

“We put new partners together and we didn’t step up to the challenge,” Plote said.

“We are looking forward to this weekend, and building off of last week,” Plote said.