Tennis player overcomes to win MVC player of the week 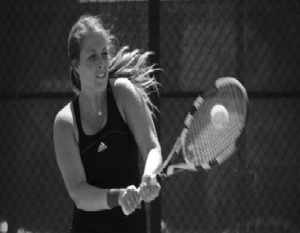 Senior women’s tennis player Kennedy Scott has overcome numerous obstacles during her career on the Hilltop.

The Calgary, Alberta native had a decorated career as a junior tennis player in Canada and was a mainstay in the starting lineup for the Braves her freshman year on campus.

Then came the injuries.

Scott missed all of her sophomore season with cartilage damage in her wrist and an ankle injury.

Last season, coach Scott Petersen left the program and Scott said she felt like she was never given the opportunity to get on the court.

Scott said it was difficult watching the matches from the sidelines knowing the kind of player she was capable of being.

“It was pretty brutal,” she said. “I like watching tennis, but it’s not very fun to sit especially when you can’t play. It’s even worse when I knew there were things I could be doing to get better but no one gave me the opportunity to do those things.”

After the season ended, Scott’s future and the team’s future was up in the air. Interim coach Jesse Plote went back to being the full-time men’s tennis coach and the athletic department began a search for a new women’s coach.

In June, the team had its answer. Chris Williams was named the 10th head coach of the Bradley women’s tennis program.

Williams said he came to the program with a fresh outlook and wasn’t going to let anyone else’s opinion influence what he thought of the team.

“When I started day one I thought Kennedy was one of the better ball strikers I had,” Williams said. “The nice thing about Kennedy is regardless of what I ask her to do she does it. She doesn’t complain. She gets after it. I can’t complain about any effort she’s given because she has really stepped up this spring.”

With a clean slate, Scott has once again become a major contributor on the court for the Braves. She is 9-5 overall this season between her play in singles and double matches.

“It feels really good [to be back on the court],” Scott said. “I’ve been playing really good the last month of this season. The majority of my teammates…this is the first year they’ve seen my ability to play tennis. I’ve had a lot of them be like oh wow. I think I’ve surprised a lot of them this year.”

Last week, Scott was rewarded for her patience and hard work making it back to the court. She was named MVC player of the week, earning a 4-1 record.

“It was really exciting,” Scott said. “I didn’t really expect it to happen. I’ve been working really hard and I think it’s something I deserved.”