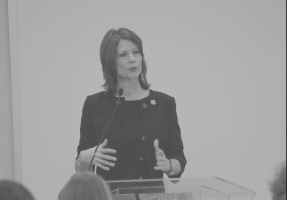 The first Congresswoman ever to represent Central Illinois attended the Women in Leadership Luncheon Monday to speak about her experiences in Congress, but she also gave advice to students on how to become future leaders.

Democrat Cheri Bustos, who was elected in November as representative of the 17th district of Illinois, gave a lecture to 125 people. Bradley is now included in the 17th district, after the university was redistricted out of the 18th district jurisdiction of Republican Congressman Aaron Schock.

“What I’m doing in Congress is for the students in this room and the young women who want to accomplish a lot in their lives,” Bustos said.

This is the third event of the Women in Leadership series, where influential women in the Peoria community and the state have come to speak to students, Executive Director of the Institute for Principled Leadership in Public Service Brad McMillan said.

Many students were invited to attend, including five female student leaders and two faculty or staff representatives were selected by the deans of each undergraduate and the graduate college. Additionally, nine women of influence who were featured in InterBusiness Issue’s December magazine were also invited. Students were encouraged to network with the women community leaders.

“We do this on a regular basis, to invite outstanding women leaders to speak on campus,” McMillan said.

Vice Chairperson of the Peoria County government Mary Ardapple was a guest of the event and announced the establishment of a new Women in Leadership scholarship. The $1,000 scholarship is open to seniors as of fall 2013 women with a GPA of 3.0 or higher and leadership experience. Applications will be available in the spring through McMillan.

“This is our opportunity for women leaders to give back to women student leaders,” Ardapple said.

A theme of Bustos’ lecture was fixing the divide in Congress. Touches of purple decorated the lecture room to represent the need to get past Congress’ bipartisanism – the mixing of red and blue states to create purple.

The Congresswoman said Congress also needs to be more representative of our country today, by including more women leaders and more people of different ages and ethnicities.

Some advice Bustos passed along to students included following through with tasks, being kind, working hard and networking. She said she encourages all students to follow these steps in order to be successful.

“There’s this saying that goes ‘if you’re not at the table, you’re on the menu,’” she said. “This is especially true to women. I encourage young women to be at the table.”

McMillan said Bustos was a strong speaker for the event.

“The energy in the room was fantastic,” he said. “The Congresswoman did a great job in sharing her values of leadership to students.”

Just like the forward-thinking Lydia Moss Bradley, Bustos said, any woman can succeed if she puts her mind to it.

“Dream big and go after anything you want to go after,” she said.